Our Cornish pasty recipe is here 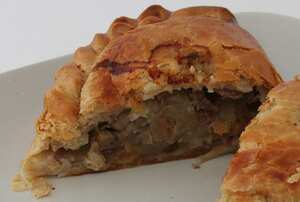 The Cornish Pasty is a PGI savoury D-shaped pasty which is filled with beef, vegetables and seasonings.

The pastry can be either shortcrust, rough puff or puff depending on the bakers’ individual recipe. After filling, the pastry can be marked for product identification purposes, e.g. knife hole, scoring or pastry cut-out shape and can be glazed with milk, egg or both which will provide its golden colour. The pastry case is savoury and robust enough to retain shape throughout the cooking, cooling and handling process and serves to avoid splitting or cracking.

The filling ingredients for Cornish Pasties consist of:

No other types of meat, vegetables, e.g. carrot, or any artificial additives are to be used in the filling and all filling ingredients must be uncooked at the time of sealing the product.

Note: Traditionally, in Cornwall ‘swede’ is referred to as ‘turnip’ so the two terms are interchangeable, but the actual ingredient is ‘swede’.

On assembling Cornish Pasties, the pasties are D-shaped and pastry edges are crimped either by hand or mechanically to one side, and never on top. The whole pasty is slow-baked to ensure that flavours from the raw ingredients are maximised. Another distinctive feature of the Cornish Pasty is that whilst the constituent ingredients are discernable in appearance, taste and texture, the fusion of the flavours arising from the raw beef and vegetables create a balanced and natural savoury taste throughout the product. The pastry also takes on light savoury notes.

Cornish Pasties must be free from artificial colours, flavours and preservatives. They are sold in a variety of sizes and weights and through a range of outlets including butchers and bakers shops, supermarkets, delicatessens and food service outlets.

Assembly of the pasties in preparation for baking must take place in the designated area. The actual baking does not have to be done within the geographical area, it is possible to send the finished but unbaked and/or frozen pasties to bakers or other outlets outside the area where they can be baked in ovens for consumption.

The administrative area of Cornwall.

Specificity of the geographical area

The nature of Cornwall’s climate — wet and mild — and its physical geography have made it ideally suited for both beef production and the growing of vegetables. Potatoes and swedes/turnips have long been, and still are, some of Cornwall’s main horticultural outputs. Although there is no requirement for the raw ingredients to be sourced from within Cornwall in practice much of it continues to be supplied by local farmers thus continuing the long established symbiotic relationship between Cornish farmer and Cornish baker.

Mining in Cornwall dates back many centuries, however, the industry reached a peak in the 18th and 19th centuries. The importance of the area’s mining heritage is such that although the industry is now extinct, select mining landscapes across Cornwall gained World Heritage Status in 2006.

Miners and farm workers took this portable, easy-to-eat convenience food to work with them because it was so well suited to the purpose. Its size and shape made it easy to carry (usually in a pocket), its pastry case insulated the contents and was durable enough to survive while its wholesome, nourishing ingredients provided enough sustenance to see the workers through their long and arduous days. There are many stories about the shape of the pasty, with the most popular being that the D shape enabled men working in tin mines to reheat them underground, as well as eat them safely. The crust (crimped edge) was used as a handle which was then discarded due to the high levels of arsenic in many of the tin mines.

There is a wealth of historical evidence confirming the importance of the Cornish Pasty as part of the county’s culinary heritage. The pasty became commonplace in the 16th and 17th centuries and really attained its true Cornish identity during the last 200 years.

Research has shown that the associations between the pasty and Cornwall are as strong today as 200 years ago, both inside the county and beyond. Tourists have been visiting Cornwall since the development of railway links into the county, leading to the Cornish Pasty becoming an integral part of the visitors’ experience. According to research conducted into attitudes to local foods in Cornwall, Cream#Cornish Clotted Cream\Cornish Clotted Cream (already a PDO) and the Cornish Pasty are the products most frequently tried by visitors. Tellingly, people surveyed for this research described the sort of pasties they ate when visiting the county as ‘proper pasties’, indicating the considerable difference between Cornish Pasties from Cornwall and the more generic, mass produced variety currently allowed to bear the name. Cornish Pasties and Cream#Cornish Clotted Cream\Cornish Clotted Cream are also the products most likely to be brought by visitors to take home, either by mail order or from local outlets (source: ‘Consumer Attitudes to Cornish Produce’ Ruth Huxley 2002).

The Cornish Pasty holds a firm and celebrated position within the culinary heritage of Cornwall and has been written about for many centuries. The pasty became commonplace in the 16th and 17th centuries and really attained its true Cornish identity during the last 200 years.

By the end of the 18th century the Cornish Pasty had become the staple diet of working men across Cornwall, and their families too. Miners and farm workers took this portable, easy-to-eat convenience food to work with them because it was so well suited to the purpose.

Evidence of the Cornish Pasty as a traditional Cornish food is found in Worgan’s Agricultural Survey of Cornwall of 1808. References include ‘the labouring man having usually a bit of beef for his pasty’. In the 1860s records show that children employed in the mines also took pasties with them as part of their crib or croust (local dialect for snack or lunch).

By the early 20th century the Cornish Pasty was produced on a large scale throughout the County as a basic food for farm workers and miners. There are examples of Edwardian postcards dated approx 1901-1910 showing Cornish Pasties and extracts from the cookery books ‘Good Things in England’ (1922) and ‘Cornish Recipes, Ancient and Modern’ (1929) showing typical pasty recipes.

Research has shown that the associations between the pasty and Cornwall are as strong today as 200 years ago, both inside the county and beyond. Tourists have been visiting Cornwall since the development of railway links into the county, leading to the Cornish Pasty becoming an integral part of the visitors experience.