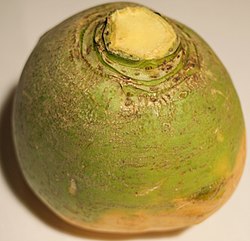 The swede, (yellow) turnip, swedish turnip or rutabaga (Brassica napobrassica, or Brassica napus var. napobrassica) is a root vegetable that originated as a cross between the cabbage and the turnip. Its leaves can also be eaten as a leaf vegetable.

"Rutabaga" (from dialectal Swedish "rotabagge", root ram) is the common American English term for the plant, while "swede" (Swede) is the preferred term used in much of England, Wales, Australia, New Zealand and India. In the U.S., the plant is also known as "Swedish turnip," "yellow turnip", or "wax turnip" (as it is sometimes sold with a waxy coating to preserve freshness) while in Ireland and Atlantic Canada, where turnips are relatively unknown, it is called turnip. In Scots, it is either "tumshie" or "neep", and the turnip (Brassica rapa var. rapa) instead is called a "white turnip". Scots will refer to both types by the generic term "neep". Some will also refer to both types as just "turnip".

How much does one cup of swede weigh?

Swedes are at their best and in season during the following months: November, December, January & February.