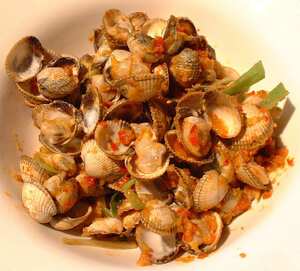 Cockles with garlic, chili and ginger

The common cockle, Cerastoderma edule, is widely distributed around the coastlines of Northern Europe with a range extending west to Ireland, the Barents Sea in the north, Norway in the east, and as far south as Senegal.

Cockles are a popular type of edible shellfish in both Eastern and Western cooking. They are still collected, as they have been since time immemorial, by raking them from the sands at low tide.

Cockles are sold freshly cooked as a snack in the United Kingdom, particularly around the parts of the British coastline which are inhabited by cockles. Boiled and then seasoned with malt vinegar and white pepper, they can be bought from seafood stalls, alongside mussels, whelks, jellied eels, crabs and shrimps. Cockles are also available pickled in jars. A meal of cockles fried with bacon, served with laver bread, is known as a traditional Welsh breakfast.

Boiled cockles (sometimes grilled) are sold at many hawker centers in South East Asia, and are used in laksa, char kway teow and on steamboats).

Consumption of raw cockles has been linked to hepatitis.

Cockles are at their best and in season during the following months: January, February, March & April.