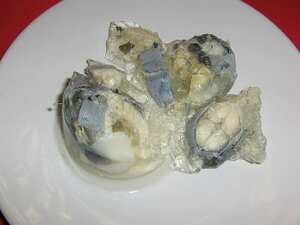 Jellied eels is a traditional English dish that originated in the 18th century, primarily in London's East End. The dish consists of chopped eels boiled in a spiced stock that is allowed to cool and set, forming a jelly. It can be eaten hot or cold.

The eel was a cheap, nutritious and readily available food source for the people of London; European eels were once so common in the Thames that nets were set as far upriver as London itself, and eels became a staple for London's poor.

The first "Eel Pie & Mash Houses" opened in London in the 18th century, and the oldest surviving shop - M Manze - has been open since 1891.

Although jellied eels are nowhere near as popular today as they were - at the end of the Second World War there were as many as a hundred Eel Pie & Mash Houses in London - they can still be found in the Eel Pie & Mash Houses that remain, and in some supermarkets. The water quality of the Thames has improved since the 1960s and is now conducive to recolonisation by eels - indeed, the Environment Agency supports a Thames fishery, allowing nets as far upriver as Tower Bridge - but lessened demand for cheap nutrition, competition from other foods and changing tastes mean that they have been marginalised.

The dish is traditionally prepared using the freshwater eels native to Britain. Typically, the eels are chopped into rounds and boiled in a fish stock with nutmeg, lemon juice and a mirepoix before being allowed to cool. The eel is a naturally gelatinous fish so the cooking process releases fats into the liquid which solidify on cooling to form a jelly, though gelatin may be added in order to aid this process.

Jellied eels are often sold with pie and mash - another traditional East End food - and eaten with chilli vinegar.

Italy has a similar dish known simply as anguilla (simply "eel"), which is eaten with balsamic rather than chilli vinegar; in France the dish is known as aspic d'anguille.