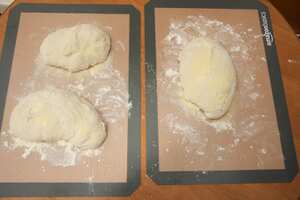 Ciabatta (carpet slipper) because of its shape, is an Italian white bread made with wheat flour and yeast. The dough for this loaf is quite wet, hence the 'collapsed' shape.

Using a breadmaker: Kneading this mixture with a wooden spoon was hard work to say the least. The second time I made these, I transferred the dough mixture to our Panasonic SD-ZB2502 automatic breadmaker for the kneading process. I set it to pitta bread (22) and let it run for 10 minutes, then switched it off and left for 3 hours to rise. It was easy to pour the dough onto the baking sheets, using a knife to cut the dough.