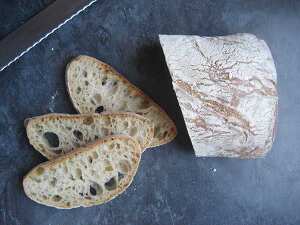 Ciabatta (literally, carpet slipper because of its shape) is an Italian white bread made with wheat flour and yeast. The loaf is somewhat elongated, broad and flattish and, like a slipper, should be somewhat collapsed in the middle. Since the late 1990s it has been popular across Europe and in the United States, and is widely used as a sandwich bread.

There are many variations of ciabatta. When made with whole wheat flour, it is known as ciabatta integrale. In Rome, it is often seasoned with olive oil, salt, and marjoram. When milk is added to the dough, it becomes ciabatta al latte.

A toasted sandwich made from small loaves of ciabatta is known as a panino (plural panini).