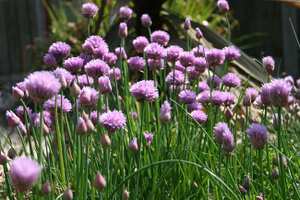 Chives are the smallest member of the onion family and have a medium strength onion flavour. The grass like stems can be finely chopped and added as a garnish to salads, sauces, yogurts, dips and main dishes. The flowers can be crumbled into florets and sprinkled on to dishes for a fabulous flavour and wonderful colour as in garlic yogurt or sour cream and chives

I would say that chives come second only to parsley as a garnish for flavour and visual impact.

As they are perennial, once planted, all you need to do is use them, year after year. They will grow well in a window box as long as they don't dry out.

A tip I recently got from a Wisley gardener was that when they get a bit brown and tatty, cut them back hard, like grass, and they will regrow, invigorated. A hedge trimmer does this in seconds. 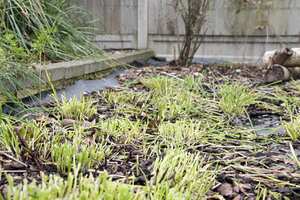 Cut them back hard once the've flowered

For recipes that require chives for flavour, the green parts of spring onions will do fine, as would green tops of young leeks. Even finely chopped onions would be ok.

Garlic chives (Chinese chives, Chinese leek, ku chai, jiu cai, Oriental garlic chives)) have a distinctive growth habit with strap shaped leaves unlike either onion or garlic, and straight thin white flowering stalks that are much taller than the leaves. It grows in slowly expanding perennial clumps, but also readily sprouts from seed. Besides its use as vegetable, it also has attractive flowers.

The cultivated form is Allium tuberosum while the wild form is placed as Allium ramosum.

A relatively new vegetable in the English speaking world but well known in Asian cuisine, the flavour of garlic chives is more like garlic than chives, though much milder. Both leaves and the stalks of the flowers are used as a flavouring similarly to chives, green onions or garlic and are used as a stir fry ingredient. In China, they are often used to make dumplings with a combination of egg, shrimp and pork.

Many garden centres carry it as do most Asian supermarkets.