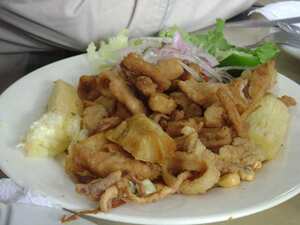 Chicharrón is a popular dish in Andalusia, Spain, and Latin America and is part of the traditional cuisines of Belize, Bolivia, Cuba, Mexico, Venezuela, El Salvador, Dominican Republic, Nicaragua, Colombia, Panama, Brazil (where it is called torresmo), Peru, the Philippines and others. They are usually made with different cuts of pork, but sometimes made with mutton. In Puerto Rico chicharrones are also made with chicken, in Argentina with beef, and in Peru with chicken or fish.

The pork rind type is the skin of the pork after it has been seasoned and deep fried, similar the the `pork scratchings' found in the United Kingdom. In Mexico they are eaten in a taco or gordita with salsa verde. In Latin America they are eaten alone as a snack, with cachapas, as a stuffing in arepas or pupusas, or as the meat portion of various stews and soups.

In central Venezuela, chicharrones are commonly sold alongside main highways as snacks. The recipe usually produces crispy sizeable portions of pork skin with the underlying meat.

In Peru, chicharrones can be eaten as an appetiser or snack, and the chicken variant can taste like fried chicken found in the United States. Sides dishes can include a kind of red onion relish, fried yucca, and other regional variants.

The cueritos type are also made with pork skin and marinated in vinegar instead of deep fried. They are eaten as a snack.

In Mexico the snack food company Barcel has commercialized a vegetarian version with chile and lime flavourings since the 1980s.

In Bolivia, chicharron is made out of pork ribs seasoned with garlic, oregano and lemon. It is boiled then cooked in its own fat, adding beer or chicha to the pot for more flavour. Pork chicharron is normally served only on Sundays and is eaten with llajua, a tomato salsa, and mote, a type of corn. There are other variations of chicharron made with chicken and fish.

In the Dominican Republic chicharrones, specially chicken chicharrón (also known as pica-pollo), are usually eaten with tostones. The way to prepare it is by washing and drying chicken and cutting it into small pieces, which are seasoned with a mix of lemon juice, soy sauce and salt. The batter is made from flour, pepper, paprika and salt in plastic bag, in which the seasoned meat is then placed and shaken. Pieces are deep-fried (without removing excess flour) until crisp and golden.