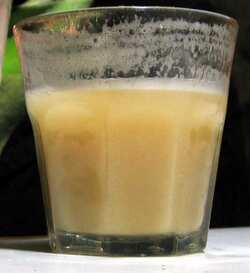 Chicha is a term used in some regions of Latin America for several varieties of fermented beverages, particularly those derived from maize, but which also describes similar non-alcoholic beverages. Chicha may also be made from manioc root (also called yuca or cassava), or fruits, and other ingredients.

It is traditionally prepared from a specific kind of yellow maize (jora) and is usually referred to as chicha de jora. It has a pale straw colour, a slightly milky appearance, and a slightly sour aftertaste, reminiscent of hard apple cider. It is drank either young and sweet or mature and strong. It contains a slight amount of alcohol, 1-3%.

While chicha is most commonly associated with maize, the word is used in the Andes for almost any homemade fermented drink, and many different grains or fruits are used to make "chicha" in different regions.