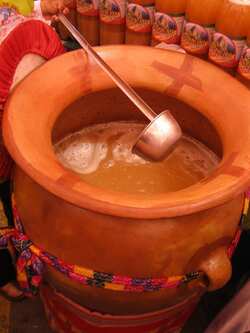 Chicha is a term used in some regions of Latin America for several varieties of fermented and non-fermented beverages, rather often to those derived from maize and similar non-alcoholic beverages. Chicha may also be made from manioc root (also called yuca or cassava), maize, grape, apple or other fruits.

While chicha is most commonly associated with maize, the word is used in the Andes for almost any homemade fermented drink, and many different grains or fruits are used to make "chicha" in different regions.

Whilst this is unlikely to satisfy purists, if, as in the UK, you are unable to obtain chica, a sweetish white wine or sherry is probably the closest you are likely to find.

There are a number of regional varieties of chicha, which can be roughly divided into lowland (Amazonia) and highland varieties, of which there are many.

Throughout the Amazon Basin (including the interiors of Ecuador, Peru, and Brazil), chicha is made most often with cassava (yuca) root, sometimes with plantain. Traditionally, the chicha is prepared from cassava root by women, using a very simple method. Pieces of washed, peeled root are thoroughly chewed in the mouth, and the resulting juice is spat into a bowl. The fibrous mass that remains in the mouth is used elsewhere.[citation needed] The bowl is set aside for a few hours to allow the juice to ferment. This chicha is a somewhat opaque blue white, similar in appearance to defatted milk, and its flavour is mildly sweet and sour. Cassava root is very starchy, and enzymes in the preparer's saliva rapidly convert the starch to simple sugar, which is converted by wild yeast and/or bacteria into alcohol.

It is traditional for families to offer chicha to arriving guests. Children are offered new chicha that has not fermented, whereas adults are offered fermented chicha; the most highly fermented chicha, with its significant alcohol content, is reserved for men.

In Bolivia chicha is most often made from maize but amaranth chicha is also traditional and popular. Bolivian chicha has alcohol. A good description of the preparation of a Bolivian way to make chicha can be found in Cutler, Hugh and Martin Cardenas, "Chicha a Native South American Beer"

In Chile there are two main types of chicha: apple chicha produced in southern Chile and grape chicha produced in central Chile. Both are alcoholic beverages with no distillation, only fermentation. Chicha is mostly consumed in the countryside and during festivities, such as Fiestas Patrias on September 18. Chicha is usually not found on formal supermarkets unless close to September 18.

In many parts of Colombia chicha is prepared with maize, yuca, quinoa, pineapple, rice, potatoes, etc., depending on the zone. Some recipes even include cannabis or coca leaf, or other traditional entheogens. It is drunk in large quantities in celebrations but also as a refreshing and nutritious beverage.

Chicha is prepared in many ways, and is considered an art, and a person who makes good chicha is respected, but it is usually kept between family and friends because of cases of prohibition, the difficulty of storing and transporting it, as well as prejudice against indigenous traditions (though the tradition has spread to many non-indigenous communities). While primarily consumed in rural areas, some bars and restaurants in Bogotá and other Andean cities serve chicha, and the drink is especially popular in countercultural circles as a sort of DIY alternative to mass produced beers.

In Ecuador chicha is, like in Colombia, prepared according to zone, lowland or highland. Highland chicha is likely to contain maize or quinoa. Chicha can be purchased from chicheros, or in restaurants, in many towns across the country, with type and availability varying seasonally. Otavalo hosts a festival of chicha, called Yamor, in September, which includes chicha contests[citation needed] and sampling of over 30 different varieties based on different types of maize.

European bread was once made in Ecuador using concho, the dregs of chicha, producing, by some accounts, a bread superior to that later made with other methods (and better milling): "In olden times when the sediment of chicha called concho was used as a ferment, we had good bread; and now with better mills good quality bread has disappeared entirely."

In El Salvador, chicha usually refers to an alcoholic drink made with maize, panela and pineapple. It is used as a drink and also as an ingredient on many traditional dishes, such as "Gallo en Chicha", a local version of Coq au vin. A non-alcoholic version usually named "Fresco de chicha" (chicha soft drink) is made with the same ingredients, but without allowing it to ferment.

In Managua and Granada,"chicha de maiz" is a typical drink, unfermented and served very cold. It is often flavoured with banana or vanilla flavours, and its saleswomen can be heard calling "¡Chicha, cafe y jugo frio!" in the squares.

Nicaraguan "chicha de maiz" is made by soaking the corn in water over night. On the following day it is ground and placed in water, red food colouring is added, and the whole mixture is cooked. Once cooled, sugar and more water is added. On the following day one adds further water, sugar and flavouring. Although fermented chicha is available, the unfermented type is the most common.

In Panama, chicha can simply mean "fruit drink". Unfermented chicha often is called batido, another name for any drink containing a fruit puree. Locally, "chicha fuerte" refers to the fermented chicha. While chicha fuerte most traditionally refers to chicha made of germinated corn (germination helps to convert starch to sugar), any number of fruits can be fermented into unique, homemade versions of the beverage. In rural areas, chicha fuerte is the refreshment of choice during and after community work parties (juntas), as well as during community dances (tamboritos).

In Lima and other large coastal cities, chicha morada is prepared from purple corn (maiz morado). It is usually sweet and unfermented, and is consumed cold like a soft drink. It is even industrially prepared and sold in bottles, cans and even in sachets as an artificially-flavoured powder drink.

Mature chicha is used in cooking as a kind of cooking wine, in, for example, seco de cabrito (stewed goat) and adobo.

Remains of a 1,000 year old production facility for chicha have been discovered on a mountaintop in Peru.

In Venezuela chicha or chicha de arroz is made of boiled rice, milk, sugar; it is generally of white colour and has the consistency of eggnog. It is usually served as a sweet, refreshing beverage with ground cinnamon and/or condensed milk toppings. This chicha de arroz contains no alcohol as it is not fermented.

Sometimes it is made with pasta or semolina instead of rice and is commonly called "chicha de pasta".

In most large cities, chicha can be offered by street vendors, commonly referred to as Chicheros, these vendors usually use a flour-like mix and just add water, and generally serve them with chopped ice and a straw and they may ask to add chocolate chips and sugared condensed milk on top. It can also be found in commercial presentations just like milk and juices. The Venezuelan Andean regions (such as Mérida) prepare an alternative version, with added fermented pineapple, which has a more liquory taste. This variety is commonly referred to as Chicha Andina and is a typical Christmas time beverage.