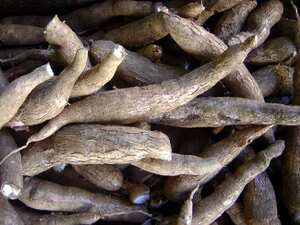 The cassava, yuca, manioc, or mandioca (Manihot esculenta) is a woody shrub of the Euphorbiaceae (spurge family) native to South America that is extensively cultivated as an annual crop in tropical and subtropical regions for its edible starchy tuberous root, a major source of carbohydrates. Cassava is the third largest source of carbohydrates for human food in the world, with Africa its largest centre of production. The flour made of the roots is called tapioca.

Cooked in various ways, cassava is used in a variety of dishes. The soft-boiled root has a delicate flavour and can replace boiled potatoes in many uses: as an accompaniment for meat dishes, or made into purées, dumplings, soups, stews, gravies, etc.. Deep fried (after boiling or steaming), it can replace fried potatoes, with a distinctive flavour. Tapioca and foufou are made from the starchy cassava root flour. Tapioca is an essentially flavourless starchy ingredient, or fecula, produced from treated and dried cassava (manioc) root and used in cooking. It is similar to sago and is commonly used to make a milky pudding similar to rice pudding. Cassava flour, also called tapioca flour or tapioca starch, can also replace wheat flour, and is so-used by some people with wheat allergies, such as coeliac disease. Boba tapioca pearls are made from cassava root. It is also used in cereals for which several tribes in South America have used it extensively. It is also used in making cassava cake, a popular pastry.

The juice of the bitter cassava, boiled to the consistence of thick syrup and flavoured with spices, is called Cassareep. It is used as a basis for various sauces and as a culinary flavouring, principally in tropical countries. It is exported chiefly from Guyana.

The leaves can be pounded to a fine chaff and cooked as a palaver sauce in Sierra Leone, usually with palm oil but vegetable oil can also be used. Palaver sauces contain meat and fish as well. It is necessary to wash the leaf chaff several times to remove the bitterness.