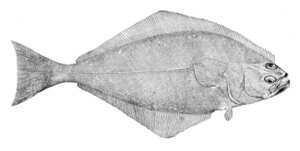 A halibut is a type of flatfish from the family of the right-eye flounders (Pleuronectidae). This name is derived from haly (holy) and butt (flat fish), alleged to be called so from being commonly eaten on holy-days. Halibut live in both the North Pacific and the North Atlantic oceans and are highly regarded food fish.

Halibut is a delicate, mild-tasting fish. It’s white, flaky flesh contains very little oil and is never a strong flavour. It can be used in any recipe that requires a mild white fleshed-fish. It is better to undercook halibut than to overcook it.

Halibut is at its best and in season during the following months: May, June, July, August, September, October, November, December, January, February, March & April.