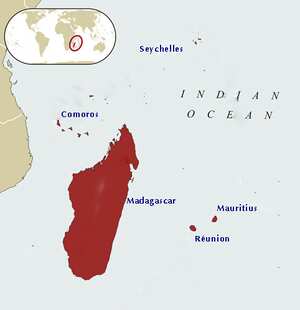 The Republic of a Mauritius, a series of small islands, 900 km east of Madagascar.

In this category you will find recipes from the Republic of Mauritius. Its geographical position in the Indian Ocean, set between Africa, India and Indonesia, probably gives some clues as character of its cuisine. Arabic, Chinese, African, Indian and French influences, amongst others, can be found can be found in the ethnic diversity of its food. It is common for a combination of cuisines to form part of the same meal. Mauritius has had strong ties with French culture throughout its history and was left with a very French "savoir vivre" [the good life]. The popularity of French dishes like the daube, civet de lièvre or coq au vin served with good wine show the prevalence of French culture in Mauritius even today. As years passed by, some have been adapted to the more exotic ingredients of the island to confer some unique flavour.

During the nineteenth century, after the abolition of slavery, Indian workers who migrated to Mauritius brought their cuisine with them. Those indentured labourers came from different parts of India, each with their own culinary tradition, depending on the region.

The end of the 19th century saw the arrival of Chinese migrants, who came mostly from the south-eastern part of China.

Along the years, each community has adapted and mixed each other's cuisine to their liking.

The island of Mauritius is renowned for having been the only known home of the dodo, a close relative of the modern pigeon.