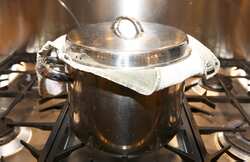 Place a cloth between the pan and the lid

I had not heard of cumin rice until I started to add recipes to the Mauritian recipe section. It's quite unusual and very nice. The cooking method makes for a more creamy textured rice and the cumin flavour is pleasant but not overpowering.

Add a small pinch of black cumin seeds as well as the white cumin seeds.