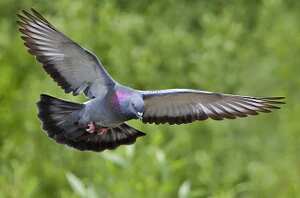 Squab is the meat from a young domestic pigeon; formerly adult birds from several species were called by the same name. Squab for the table are roughly a month old; they have reached adult size but have not yet flown. Consumed throughout much of recorded history, squab is not usually a staple food where it is a part of modern cuisine, and it may be considered peculiar or exotic.

Usually considered a delicacy, squab is tender, moist and richer in taste than many commonly-consumed poultry meats, but there is relatively little meat per bird. Today, squab is eaten in many countries, including France, America, Italy, the Maghreb, and several Asian countries. Typical dishes include: breast of squab (sometimes as the French salmis), Egyptian mahshi (stuffed with rice and herbs), the Moroccan dish pastilla and of course the quintessential English country dish, pigeon pie.

In some parts of the developed world, squab meat is thought of as exotic or distasteful by many consumers, often as a result of the image of the feral pigeon as an unsanitary urban pest. However, squab produced from specially-raised utility pigeons continues to be a part of the menus at American haute cuisine restaurants such as Le Cirque and The French Laundry. Accordingly, squab is often sold for much higher prices than other poultry, sometimes as high as eight USD per pound. In Chinese cuisine, squab is a part of celebratory banquets for holidays such as Chinese New Year. The greatest volume of U.S. squab is sold within Chinatowns currently.

Pigeon is commonly shot as a game bird. Because there is relatively little meat on a pigeon, and what meat there is has a very strong, almost liver-like flavour, pigeon meat is better suited to flavouring sauces being the main substance of a dish.

Pigeon is at its best and in season during the following months: April, May, June, July, August, September & October.