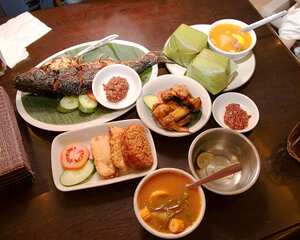 A Sundanese restaurant meal in Jakarta

This category contains recipes from Indonesia. Indonesian cuisine is diverse, in part because Indonesia is composed of approximately 6,000 populated islands. Many regional cuisines exist, often based upon cultural and foreign influences. Throughout its history, Indonesia has been involved in trade due to its location and natural resources. Additionally, Indonesia’s indigenous techniques and ingredients were influenced by India, the Middle East, China, and finally Europe. Spanish and Portuguese traders brought New World produce even before the Dutch came to colonise most of the archipelago. The Indonesian islands The Moluccas (Maluku), which are famed as "the Spice Islands", also contributed to the introduction of native spices, such as cloves and nutmeg to Indonesian and global cuisine.

The following 10 pages are in this category, out of 10 total.