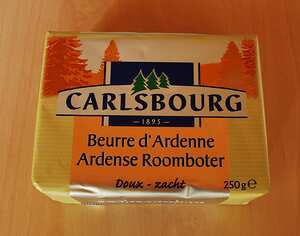 Beurre d'Ardenne is an AOP/BOB Belgian pasteurised dairy butter which, in addition to the conditions prescribed by law, meets very precise criteria regarding chemical composition, bears the inspection mark of the National Dairy Office delivered following an organoleptic test, and is manufactured milk from the Belgian Ardennes. The butter must also be processed in the same area..

In the Ardennes, butter has always been very highly rated, even by the local inhabitants themselves. However, they ate very little of it for various reasons, including low milk production, until the mid-nineteenth century. Butter was at that time food for the rich, sold at high prices in the region itself. Lard and tallow, as well as bacon fat, were the main fats consumed. Towards 1870, there was a very rapid improvement in milk production and village dairies and regional butter-dairies collecting the cream from them were set up. The production and consumption of butter started to grow very quickly. Towards 1910, beurre ď Ardenne held an important place among the other local specialised butters (Herve, Hasselt etc) appreciated on the Liège market. The Brussels market was already a large-scale consumer at that time.

The success of the word ARDENNE resulted in it being usurped to such an extent outside the Ardennes, between the two World Wars, that the inhabitants of the Ardennes were vociferous in calling for an end to these improper practices. The constant efforts by the Ardennes producers, agricultural organisations and Provincial Trade Corporations culminated in 1984 with the Belgian legislator recognising the designation of origin "BEURRE D'ARDENNE", which lays down the conditions for production and the territorial limits where this butter can be produced.

The Ardennes is a country of medium altitude. It is characterised by an acid soil. It has a harsh, humid climate, meagre soil but vigorous harvests. These climatic and geological factors influence the quality of the production of the land. It is also a country essentially devoted to stock-farming. Grass is the main crop. This grassy vegetation is characterised by its special flora which is also a result of the climatic and geological conditions. The composition of the milk and its organoleptic properties are closely related to the nature of the grass consumed by the Ardennes cows. In their production, the dairy cows are undeniably affected by the influences of these many factors of the natural environment. As in the case of wine and its different vintages, these influences determine naturally the specific characteristics of the milk and are ultimately to be found in the produce derived from it, to the extent that it is common to refer to butter in terms of "local specialities".