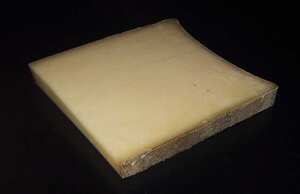 Beaufort is an AOP hard, rather sharp cheese made from cows' milk and is similar to gruyère. It is produced in the area around Beaufort located high in the French Alps in the Savoie region of France. It is this high altitude that imparts Beaufort with a unique flavour.

There are three varieties of Beaufort:

Beaufort cheese has a lack of holes yet is similar to Gruyère, Comté or Emmental. However, it is often considered even superior and sharp in taste. Beaufort also has a very distinct aroma reminiscent of the pastures on which graze the Tarentaise and Abondance cows, which provide the cheese's milk.

Beaufort is commonly used to make cheese fondue because it melts easily. One of the few cheeses that go well with white wine, Beaufort is often enjoyed with salmon.

If the Beaufort cheese is not listed below, select a similar type of cheese from the list below to get a rough idea for the number of calories in Beaufort cheese.