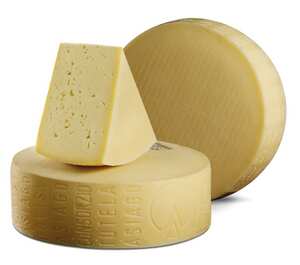 Asiago pressato (or fresh Asiago) is made with raw or pasteurised (at 72 °C for 15 seconds) cows' whole milk from one or two milkings. It can be sold 20 days after production and it has a mild sweet flavour. It has a white or pale straw colour. The eyes are marked and irregular. The texture is soft and elastic, it's not sticky or greasy.

Its aroma is reminiscent of yogurt and butter. It has a pleasantly mild taste, not salty, never bitter and melts easily in the mouth.

The milk is heated to 35-40 °C then calf rennet is added. The curd is then cut using a curd knife called "lira" until the granules are the size of walnuts. The curd is then semi-cooked until the temperature of the mass reaches 44 °C. It is then worked benches where it is repeatedly cut and then salted. The curd is placed in moulds and compacted manually or using pneumatic presses for several hours. The cheese is kept at 10-15°C and with relative humidity at 80/85% for at least 48 hours. If the paste was not previously salted, the salting process is done by spreading salt over the surface of the cheese or by soaking it in brine at 20 °C.

The last step is the ageing process (maturation) which lasts at least 20 days and takes place in warehouses with controlled temperature and relative humidity: 10-15 °C and 80/85%.

Asiago pressato cheese is tender and can be used in the preparation of sandwiches and panini or as a table cheese.