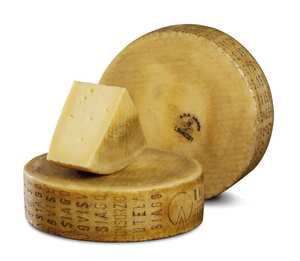 Asiago d'allevo (or mature Asiago) is made using raw semi-skimmed cow's milk from one or two milkings. It has a strong, distinctive taste which varies according to the ageing which varies from 3 to 12 months or even longer. It has a straw or light straw colour. The eyes are small to medium (less than 1 cm). The texture is compact yet soft but as it matures it becomes hard like a grating cheese. It does not stick to the fingers but leaves a light and pleasantly fragrant greasiness. The aroma it similar to the one of bread or pizza dough and dry almonds and hazelnuts. Its taste is intense and full of flavour. It is sweet like a boiled chestnut and becomes more and more aromatic and salty towards the rind. The aroma increases with age.

According to the duration of the ageing the Asiago d'allevo is divided:

The milk is heated to 35 °C and calf rennet is added. The curd is then cut until the granules are the size of hazelnuts or smaller. It is semi-cooked until the temperature of the mass reaches 47 °C. The curd is then placed in moulds and drained for a couple of days, during this time the wheels are turned several times. The cheese is then salted either by spreading salt over the surface of the cheese or by soaking it in brine.

The last step is the ageing process which lasts at least 2 months and takes place in warehouses with controlled temperature and relative humidity: 10-15 °C and 80/85%.

The cheese can be matured for up to 12 months or more.

Asiago d'allevo Vecchio and Stravecchio can be used as grating cheese as an alternative to Grana Padano or Parmigiano Reggiano.