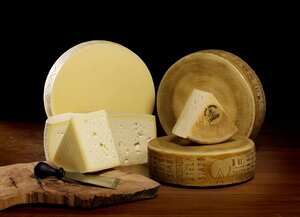 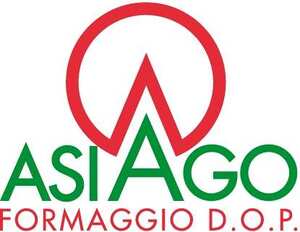 Asiago is an Italian DOP (Denominazione di Origine Protetta) equivalent to PDO (Protected Designation of Origin) cheese made with cows' milk from the plateau above Asiago. It is produced in two different types: fresh (Asiago pressato) and cured/matured (Asiago d'allevo). These two type cheese have different flavours and different production processes, therefore they cannot be distinguished simply by the ageing period. Asiago pressato, delicate and sweet as fresh milk, is made ​​with whole milk. Asiago d'allevo, with a stronger taste and different levels of savoury depending on ageing (from 3 to 12 months), is made with skim milk. Every Asiago wheel has markings and symbols to certify it is a PDO product: the name "ASIAGO" on the side and the cheese logo are always present. A manufacturer's code which identifies the cheese maker, a casein code gives details of the date of production, production information and names of the dairies, a letter of the alphabet which indicates the month of production and initials of the dairy.

Back in the year 1000, sheperds from the plateau above Asiago used to make a cheese using sheep's milk. Around the year 1500, sheep were replaced by cows and from then on cow milk has been used. Asiago d'allevo, and in particular Asiago d'allevo stravecchio (the most aged type), is today the variety which closely resembles the simple cheese made thousands years ago called "pegorin" by the shepherds. In the 1920s local dairies began producing Asiago pressato, also known as fresh Asiago.

Both Asiago pressato (or fresh Asiago) and Asiago d'allevo (or mature Asiago) are produced in an area which stretches from the meadows of the Po Valley to the Alpine pastures of the Asiago plateau in Veneto and Trentino. The milk comes from four provinces: the entire province of Vicenza and Trento and a small part of the provinces of Padova and Treviso. When the cheese is produced entirely in dairies located more than 600 metres above sea level, using milk collected from farms in this limited area, and is then processed and matured in shepherds' huts and dairies in this same area, it is entitled to the additional distinction "Product of the Mountains".

Buy on line or in shops (in UK)

If the Asiago cheese is not listed below, select a similar type of cheese from the list below to get a rough idea for the number of calories in Asiago cheese.