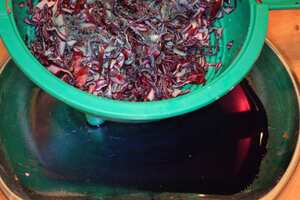 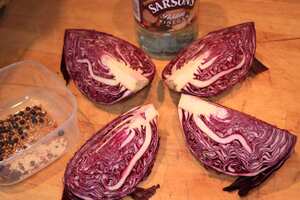 This is my spicy version of Mrs Beeton's pickled red cabbage recipe.

Adjust the spices to suit your personal taste.

I like to strain the vinegar so it's clear, but if you omit the ginger powder, you probably won't need to.

I've made this recipe 4 or 5 times now and it's a real winner!

If you notice a musty smell from the cabbage before you cut it open, yet it appears perfect on the outside, cut it in half and check the core. More than once I've had a little mould on the inside leaves around the core. Discard them and wash the cabbage once it's been sliced if you are really paranoid. Do pat it dry on a tea-towel before salting.

There is no need to peel ginger. As a result of attending a Thai cookery demo, we have learnt that peeling ginger is unnecessary unless for aesthetic purposes as the skin is high in fibre and full of flavour. However, do remove any bits that have become tough or woody.