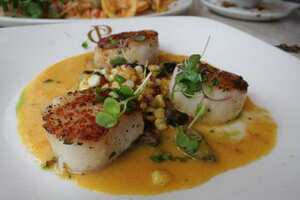 A scallop is a marine bivalve mollusk. They are highly prized as a food source and some are also valued for their brightly coloured shells.

Like true oysters , scallops have a central adductor muscle, and thus the inside of their shells has a characteristic central scar, marking the point of attachment for this muscle. The adductor muscle of scallops is larger and more developed than that of oysters, because they are active swimmers; scallops are in fact the only migratory bivalve. Their shell shape tends to be highly regular, recalling one archetypal form of a seashell, and because of this pleasing geometric shape, the scallop shell is a common decorative motif.

Scallops are a popular type of shellfish in both Eastern and Western cooking. They are characterised by having two types of meat in one shell: the adductor muscle, called "scallop" which is white and meaty, and the roe, called "coral", which is red or white and soft.

In Western cuisine, scallops are commonly sautéed in butter, or else breaded and deep fried. Scallops are commonly paired with light semi-dry white wines. In the U.S., when a scallop is prepared, usually only the adductor muscle is used; the other parts of the scallop surrounding the muscle are ordinarily discarded. Sometimes markets sell scallops already prepared in the shell with only the adductor muscle intact. Outside the U.S., the scallop is often sold whole.

Scallops have lent their name to the culinary term scalloped, which originally referred to seafood creamed and served hot in the shell (Rombauer 1964). Today it means a creamed casserole dish such as scalloped potatoes which actually contains no seafood at all.

Scallops are at their best and in season during the following months: July, August, September, October, November & December.