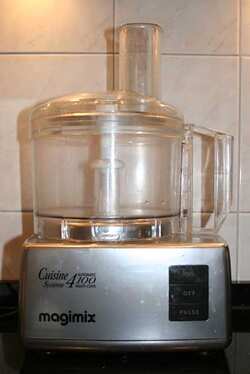 A food processor is a kitchen appliance used to facilitate various repetitive tasks in the process of preparation of food. Today, the term almost always refers to an electric-motor-driven appliance, although there are some manual devices which are also referred to as "food processors".

Food processors are similar to blenders in many ways. The primary difference is that food processors use swappable blades and disks (called attachments) instead of a fixed blade. Also, their bowls are wider and shorter, which is a more appropriate shape for the solid or semi-solid foods which normally go into a food processor. Usually, little or no liquid is required in the operation of the food processor, unlike a blender which requires some amount of liquid to move the particles around its blade.

A coffee grinder is better than most food processors for grinding spices unless the latter has a specific spice-grinding attachment.