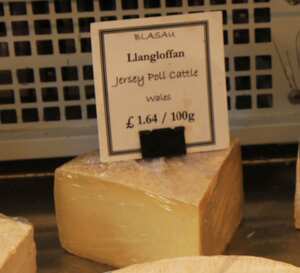 Llangloffan is a hard, raw cow’s milk cheese which was originally produced in the 1970s in Pembrokeshire but since 2007 it has been made by the Carmarthenshire Cheese Company, after the original producer retired.

The cheese has a dryish, crumbly texture and is matured for 3 months. It is sold as a 4kg wheel or can be bought in 1kg packs. It is available in white, red, garlic and chive and smoked varieties and it has received numerous awards.