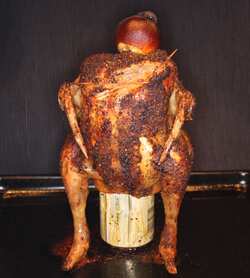 What is Indirect grilling

Indirect grilling is a barbecue cooking technique in which the food is placed to the side of the heat source instead of directly over the flame as is more common. This can be achieved by igniting only some burners on a gas barbecue or by piling coals to one side of a charcoal pit. A drip tray is placed below the food to prevent fat from the food igniting and generating a direct flame. Indirect grilling is designed to cook larger (e.g. pork shoulders, whole chicken) or tougher foods (e.g. brisket, ribs) that would burn if cooked using a direct flame. This method of cooking generates a more moderate temperature (about 275-350°F) and allows for an easier introduction of wood smoke for flavouring.

While placing the food to one side of the fire places the food further from the heat source and thus reduces the intensity of the radiation, the food is still exposed to direct radiation from the fire. Other variations of indirect grilling place a physical barrier between the food and the fire. Plank cooking is one such method where a plank or an unperforated tray on the grill as a base upon which to cook. If the plank is made from wood and is soaked before grilling, the wood can then be used to impart flavour to the food. Another method of indirect grilling is to place a physical barrier such as a pizza stone between the fire and the food. The heat rises from the fire around the edges of the barrier and then circulates around the food. Most brands of kamado style outdoor cookers have accessories known as heat deflectors which can be placed above the fire and below the food grate.

Beer can chicken is another method of indirect grilling where a can of beer, or even water is inserted into the cavity of the chicken during cooking. The steam from the liquid in the can help to cook the chicken and keep it moist during the cooking process.