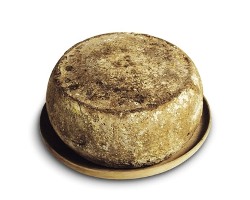 Valle d'Aosta Fromadzo (DOP) is produced in the entire area of the Autonomous Region of Valle d'Aosta from cows' milk, sometimes with the addition of a very small amount of goats' milk, coming from at least two milkings and which can be divided, according to different processing methods, into partly skimmed milk and lowfat milk types. It has a cylindrical shape, with flat or almost flat faces and a straight or slightly rounded outer rind. It is straw-coloured outside, becoming greyish after long ageing, sometimes with a reddish tint. The product is matured for a minimum of 60 days up to a maximum of 8-10 months.

Since ancient times the local people have used the word "fromadzo", etymologically derived from French roots, when referring to a typical, partly skimmed milk cheese made in the Valle d'Aosta area and consumed as an alternative to the whole milk product historically designated as "Fontina". In more recent times, the tradition of a Valle d'Aosta partly skimmed milk cheese has been upheld, as may be seen both in the market reports from various local markets and in other specialized publications, bringing about the conditions for the recognising of the relative designation of origin, which is currently regulated by a special decree which defines the different production requisites.

After a resting period, which varies according to the environmental conditions and the cheese type, the milk is coagulated, sometimes with the inoculation of natural, autochthonous milk enzymes, making use of the spontaneous growth of dairy microflora. The curd is broken and placed in special containers, called "féitchie", where it can be lightly pressed and turned over. After salting, the cheese is cleaned, before being ripened in special rooms of the proper temperature and humidity for completing the medium-long ageing process. Seeds or parts of aromatic herbs may be added to the cheese during processing.

The natural factors are connected with the environmental conditions of the production area, for the most part characterised by an Alpine or Pre-Alpine climate, which influences the quality of the forage used to feed the cows in the defined area, where (especially in the areas of highest elevation) traditional animal-raising methods are still employed which make use of local resources, in particular the naturally growing vegetation, sometimes supplemented with hay. The human factors include the traditional processing methods, which have been maintained over time, and the presence of the cheese in local markets, attested by various historical and commercial documents.