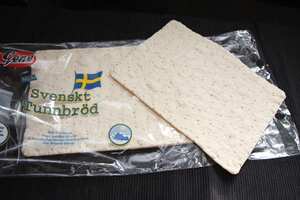 Soft tunnbröd, with a hint of fennel - sold at Ikea Food

Tunnbröd (literally "thin bread") is the Swedish version of flatbread. Tunnbröd can be soft or crispy, and comes in many variants depending on choice of grain, leavening agent (or lack thereof) and rolling pin. The dough is made from any combination of wheat, barley and rye.

Soft tunnbröd is commonly used as a wrap for other food, not unlike a crêpe or burrito. A popular fast food dish is soft tunnbröd rolled around mashed potatoes and a hot dog, known as tunnbrödsrulle (tunnbröd roll).