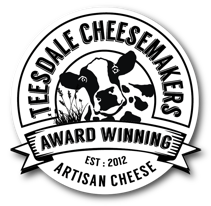 Teesdale Cheesemakers were previously Leaside Cheesemakers, founded by Brian and Esme Dedman in 2012. The husband and wife team of Allison and Jonathan Raper took over the business in January 2016.

Please note they do not sell direct from the dairy.