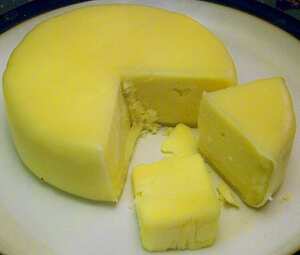 Swaledale is a full fat’ hard’ PDO cheese made in the town of Richmond in Swaledale, North Yorkshire. It is produced from unpasteurised cows’ milk, Swaledale ewes’ milk and goats’ milk.

The cheese is round in shape with an average weight for the cheese wheel of 2.25 kg. The animals whose milk is used to make Swaledale cheese, all graze on land in Swaledale which makes their milk characteristic of the area as a particular mixture of herbs and grasses grow there due to its soil and climate and this give the cheese distinctive properties. It has a moist, medium firm texture and its flavour is described as having “the freshness of the misty Dales and wild bracken, with the sweet caramel undertone of ewes’ milk”.

Swaledale is handmade to a recipe from the area, the knowledge of which is limited to a few people. Milk from farms in there is collected and, in the first stage of the cheese making process, heated to 28 °C with microbiological culture. After being left for two hours rennet is added to the milk. The mixture is then left to curdle for an hour after which time the resulting curd is heated to 28 °C, cut up and stirred. It is then cut up again, drained and the resulting cubes stacked up, before the blocks are broken up and then put into moulds lined with muslin. The moulds are then lightly pressed during storage at 28 °C for 18 hours, and are turned once after four hours. Once the cheese has finished being pressed it is removed from the moulds and is soaked in a solution of 85% brine for 24 hours.

After being made the cheese is stored in humid cellars. While it is maturing, if it is not covered in natural wax, a grey-blue mould grows on its rind. The cheese takes between three to four weeks to mature.

The cheeses have won a number of awards including three gold awards at the 2008 Great Taste Awards and three gold and two bronze medals at 2008 World Cheese Awards.