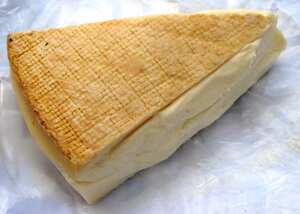 Stinking Bishop is a soft gourmet cheese produced since 1972 by Charles Martel and Son at Laurel Farm, Dymock, Gloucestershire in the South West of England. It is made from the milk of Gloucester cattle, which in 1972 consisted of only 68 Gloucester breed heifers. The breed has been revived to make production of the cheese possible, though it is often combined and pasteurised with the milk of Friesian cattle from a nearby county. The fat content is 48%.

The colour ranges from white/yellow to beige, with an orange to grey rind. It is moulded into wheels 2 kg (4.4 lb) in weight, 20 cm (8 inch) in diameter, and 4 cm (1.5 inch) deep. Though only about 20 tonnes are produced each year. Stinking Bishop's notorious odour, which is said to be similar to unwashed socks and wet towels, keeps it popular in the UK and abroad. The distinctive odour comes from the process with which the cheese is washed during its ripening; it is immersed in perry made from the local Stinking Bishop pear (from which the cheese gets its name) every four weeks while it matures. The process is said to have links with that used by local Cistercian monks who have long been associated with the production of washed rind cheeses. As with the French cheese Époisses de Bourgogne, the odour of Stinking Bishop is often found offensive.

To increase the moisture content and to encourage bacterial activity, salt is not added until the cheese is removed from its mould. Air bubbles form in the mould, giving the finished cheese an Emmental-like appearance when sliced.

The cheese was brought to international attention by a brief but important role in the Oscar-winning 2005 animated film Wallace & Gromit: The Curse of the Were-Rabbit, in which it was used to revive Wallace from the dead. Demand for the cheese subsequently rose by 500%

Stinking Bishop won Bronze and Gold Medals at the British Cheese Awards in both 2011 and 2012.