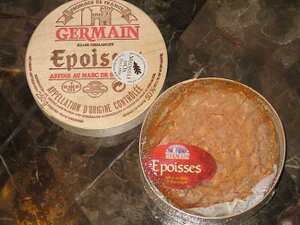 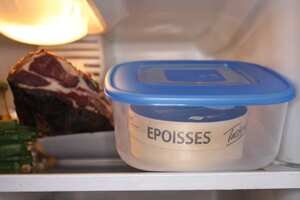 Époisses de Bourgogne is an AOP cheese made in the village Époisses found in the commune of Côte-d'Or, a département of France. It is located around halfway between Dijon and Auxerre.

Commonly referred to as Époisses, it is a pungent unpasteurised cows-milk cheese. A washed-rind cheese (washed in marc de Bourgogne, the local pomace brandy), it is circular at around either 10cm or 18cm in diameter, with a distinctive soft red-orange colour. It is sold in a circular wooden box, and is best served with a good red Burgundy wine, or even Sauternes.

Napoleon was a particular fan of the cheese, and the famous epicure Brillat-Savarin himself classed it as the "king of all cheeses".

Its odour is so strong that reportedly it has been banned from French public transport.

One way to stop the odour permeating your fridge (and kitchen, and house) is to store the cheese in an airtight box. Whilst I imagine a purist would sniff at the idea, it's prevented arguments in our household!