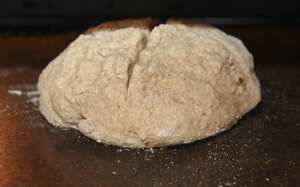 On the baking stone, ready to bake 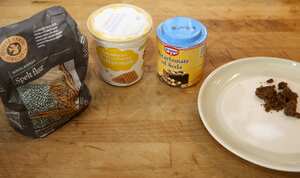 Soda bread, (Scotland: Scofa Scottish farl) - is a type of quick bread in which baking soda (otherwise known as sodium bicarbonate) is used for leavening rather than the more common yeast. The ingredients of traditional soda bread are flour, bread soda, salt, and buttermilk. Other ingredients can be added such as raisins, egg or various forms of nuts.

The buttermilk in the dough contains lactic acid, which reacts with the baking soda to form tiny bubbles of carbon dioxide. Soda bread can dry out quickly and is typically good for two to three days; it is best served warm or toasted. In Ireland, typically the flour is made from soft wheat; so soda bread is best made with a cake or pastry flour (made from soft wheat), which has lower levels of gluten than a bread flour.

Various forms of soda bread are popular throughout Ireland. Soda breads are made using either wholemeal or white flour, with the former known colloquially as "brown bread" in the Republic of Ireland. In Northern Ireland the wholemeal variety is known as "wheaten bread" and normally sweetened, while the term "soda bread" is restricted to the white savoury form normally served fried. The two major shapes are the loaf and the "griddle cake", or farl in Northern Ireland. The loaf form takes a more rounded shape and has a cross cut in the top to allow the bread to expand. The griddle cake or farl, is a more flattened type of bread. It is cooked on a griddle allowing it to take a more flat shape and split into four sections.

Serve with butter and cheese. It is best eaten on the day of baking as it does not keep as well as yeast-leavened bread.

Use spelt flour for a wholemeal-type loaf which is also easier to digest than normal wholemeal flour.