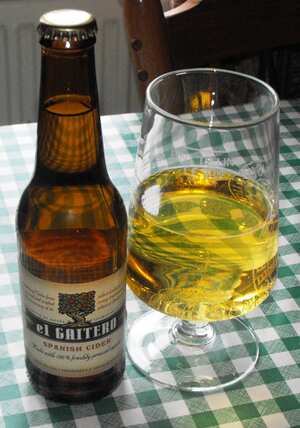 Asturian cider - however this one is not DOP

— Cider: a drink obtained from partial or total alcoholic fermentation of fresh apples or apple must.

The minimum alcohol content by volume should be 5 %. Cider with a sugar content of less than 30 g/l is dry; between 30 and 50 g/L, the cider is semi-dry, and sweet cider contains over 50 g/l (up to a maximum of 80 g/l). The organoleptic properties of the cider are its characteristic strong flavour, which may be dry, semi-dry or sweet; the presence of persistent small, medium and large bubbles of carbon-dioxide gas of endogenous origin; the clean and balanced aroma, with overtones of fresh or stewed apples; and the appearance of a transparent, sparkling drink of clear almond hue.

— Natural cider: a drink obtained from partial or total alcoholic fermentation of fresh apples or apple must, produced in accordance with traditional practices, without the addition of sugar, containing carbon-dioxide gas of endogenous origin. The minimum alcohol content by volume should be 5 %.

The natural cider is characterised by a strong flavour, with a good balance between sharpness and bitterness and a slight natural piquancy. The aroma is clean and fresh with a variety of fruity notes and a slight acidity. Its appearance is that of a transparent, sparkling drink of a colour tending to golden or straw coloured.

Both products are prepared from varieties of cider apples traditionally cultivated in the area of production.

The varieties authorised are classified by their acidity and the concentration of phenolic compounds in eight technological groups: sweet, bitter-sweet, bitter, semi-acid, semi-acid-bitter, bitter-semi-acid, acid and acid-bitter.

The area of production of the apples and manufacture of the cider protected by the designation of origin Sidra de Asturias is the Autonomous Community of the Principality of Asturias. Asturias is a geographical and historical region of northern Spain and comprising 78 municipalities (concejos):

Although the designated geographical area covers 10,560 km2, Asturias is one of the most mountainous regions of Europe, which severely limits the agricultural area which can be used to grow apples.

Cultivation takes place in small valleys and hillsides throughout the designated area (the 78 municipalities listed).

The soil and production conditions of Asturias mean that agricultural holdings are spread to a greater or lesser extent throughout these municipalities, which means that rural population centres are small and dispersed, as are the plots of land.

Traditionally, cider apples have been grown in Asturias in extensive farming mixed with natural grassland.

Because holdings there are small, this combination of livestock farming and the production of apples for cider has exerted considerable socio-economic influence on the countryside by generating extra income on family holdings and checking to some extent the flight from the land by providing an occupation which cares for the environment and retains population.

As in the case of plantations of cider apples, presses have historically been small-scale on holdings which produce cider for family consumption on the farm. This practice has gradually dropped into desuetude and now presses are concentrated close to infrastructure and with more appropriate services for industrial operation.

The cider is produced from varieties of cider apple traditionally grown in the production area.

The successive stages in the manufacture of the cider are washing and crushing the apples; obtaining natural must by pressing; fermentation; decanting; clarifying; filtering with permitted products and materials; bottling.

The cider may be carbonated using CO2 produced endogenously during the manufacturing process, in accordance with the conditions laid down in this document, the specifications and the quality manual.

Requiring cider to be bottled in the Sidra de Asturias DOP designated area is intended to protect the reputation of the designation by guaranteeing both the authenticity of the product and the maintenance of its quality and characteristics, which the beneficiaries assume fully and collectively through the Consejo Regulador set up for that purpose.

It ensures inspection and traceability of the products obtained, so avoiding any possibility of mixture with products from elsewhere, since the inspections in the area of production under the responsibility of the beneficiaries of the designation of origin are scrupulous and systematic and carried out with a thorough knowledge of the characteristics of the product.

Similarly, the fact that cider may include only CO2 which is produced endogenously during the manufacturing process, entails the use of appropriate equipment alongside the bottling plant so that it would be inconvenient, and greatly complicate the inspection process, if it were transported to other bottling plants with the risk of the process being ‘adulterated’.

during the fermentation of the must, may be used.

or concentrated apple must, up to a maximum proportion by volume of one part of solution to ten of cider base.

Asturias is Spain's major cider-producing region, accounting for 80 % of national output. The history of the region is closely linked to cider apple growing and the manufacture of cider, as is clear from the reports by the geographer Strabo in 60 BC.

Over the centuries, Asturian farmers have selected varieties from trees obtained from seed, without grafting, choosing the most productive, best suited to the environment and producing the best quality cider apples. It is the features of different varieties and all the resulting mixtures which give Asturian ciders their special semi-acid character.

The inclusion in the designation of the two products (natural cider and cider) results from the quality rules in Spain (Ministerial Order of 1 September 1979) which differentiates between them on the basis that cider may be produced with exogenous CO2, either added or from any source.

The two types of cider covered by the designation start from the designation ‘natural cider’. In the case of ‘cider’, CO2, whether recovered from the fermentation process (so solely endogenous) and the addition of a small quantity of sugar syrup. The raw material, the production technology and the industrial equipment are virtually the same, although ‘natural cider’ is much older, with ‘ciders’ with added CO2 appearing with the advances in technology and research achieved in the nineteenth-century.

The geographical name ‘Asturias’ is historically linked to the manufacture and consumption of cider in Spain, since it is the region which accounts for largest share of production.

Cider is the third most important product, in terms of turnover, in the Asturian food and agriculture sector. Natural cider is produced in traditional presses, of which Asturias possesses 106 on a commercial scale. Family tradition is particularly strong, in that over 60 % of these presses were inherited by their owners. The most common legal form is the sole proprietorship; only about 10 % take the form of an incorporated or limited company. Asturias accounts for 93 % of the total natural cider market. Cider production is largely accounted for by 10 firms, which together represent 61 % of the total turnover of the sector. The national market absorbs about 80 % of output, with some 13-14 % being exported and the remaining 7 % consumed in the region of Asturias.