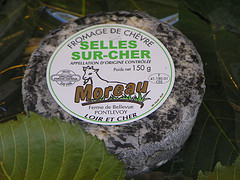 The cheese is sold in small cylindrical units, around 8cm in diameter at the base (reduced to around 7cm at the top) and 2-3cm in height, and weighing around 150g. The interior is typical of goats’ cheese, rigid and heavy at first but moist and softening as it melts in the mouth. Its taste is lightly salty with a persistent aftertaste. The exterior is dry with a grey-blue mould covering its surface and has a musty odour. The mould is often eaten and has a considerably stronger flavour.

The cheese is allowed to mature for between 10 and 30 days during which time it dries as the mould forms on its exterior. An initial coating of charcoal encourages the formation of its characteristic mould.