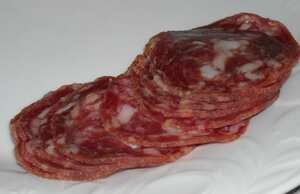 Salchichón is a type of Spanish cured sausage made with lean pork and some bacon, seasoned with salt and some common spices like black pepper, nutmeg, cloves or coriander. The mixture is minced, allowed to rest for about 24 hours and stuffed in cow or pig intestines. It is hung to mature and can be smoked or air-dried for several days.

There are varieties that contain a mixture of sausage meat, beef or pork, boar, venison etc. The sausage should be considered as a Spanish salami. 'Fuet is a popular Catalán salchichón, which is thinner than the usual varieties. 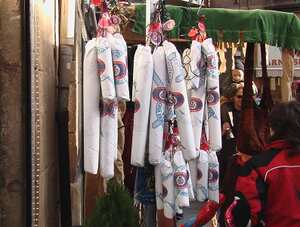 Salchichón de Vic aka Llonganissa de Vic is a raw, cured sausage which is produced in 28 villages in La Plana de Vic (Barcelona). The area is a wide thoroughfare between the Pyrenees and the coastal plain, at an altitude ranging between 400 and 600 metres above sea level. It has IGP protection.

The sausage is made with minced pork (ham, shoulder or top quality lean meat, from white pigs) to which cubed bacon, salt and black pepper are added. These ingredients are mixed together and the resulting mixture is cold stored and left to macerate for 48 hours. The mixture is then used to fill natural intestinal casings and cured for a minimum of 45 days. The length of the curing period depends on the type of casings used.

It is cylindrical in shape and has a reddish colour when cut, with cubes of bacon and visible grains of black pepper. The outside is a whitish colour due to characteristic fungal flora on the surface. A wide range of natural casings derived from intestines are used to make this product and they determine its size, weight and length. Its diameter must be between 3.5 cm and 90 cm 35-40 90; it should weigh 300 g – 2.5 kg; it must be 20 cm -90 cm in length.

As early as 1456 there are written references to Salchichón de Vic, although evidence of the sausage has been found in writings from the fourth century. This product was formerly made on farms in the area, as a means of preserving the prime cuts of meat. The manufacture of the sausage in La Plana de Vic is made possible by the environmental and climactic conditions of the area and the savoir-faire handed down through generation of makers of this sausage.