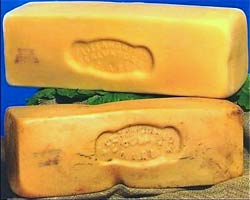 DESCRIPTION: Ragusano is a DOP cheese made from whole cows' milk, with medium to long ageing, having a block shape and a square cross-section, with rounded corners. It is possible to find slight grooves on the surface from the cords used to hang the cheese during the ageing process. The external colour is a straw to golden yellow, tending towards brown with further ageing. The product may be "enveloped" in olive oil, depending on traditional customs. Smoking the cheese by natural smoking processes is permitted, and in this case the designation of origin is followed by the word "affumicato" ("smoked").

GEOGRAPHICAL AREA: The entire area of the Communes of: Acate, Chiaramonte Gulfi, Comiso, Giarratana, Ispica, Modica, Monterosso Almo, Pozzallo, Ragusa, Santa Croce Camerina, Scicli and Vittoria in the province of Ragusa, and the Communes of Noto, Palazzolo Acreide and Rosolini in the province of Siracusa, defining an area with particular environmental characteristics.

EVIDENCE OF ORIGIN: The cheeses of Sicily have been known since the time of ancient Greece and have maintained certain characteristics over the centuries, despite being adapted to the changing tastes and production methods of various eras, In recent times it was decided to establish regulations for the different types of cheeses produced in Sicily, including "Ragusano" cheese, which has been recognised under Italian law for several decades and which is currently regulated by a special decree which defines the requisites for the designation of origin.

ACQUISITION: After the milk is coagulated with calf or kid rennet, the curd is broken into granules which are initially lentil-sized, and which are about the size of rice grains by the end of processing . After the drying stage, the curd obtained is cut and covered with hot water, making it possible to process it into its characteristic shape. The product is then salted and aged for a medium-long period of time.

LINK: The natural factors are connected with the environmental conditions of the production area, mostly mountains or foothills, which influences the quality of the forage used to feed the cows in the defined area. Traditional animal-raising methods are employed which make use of local resources, in particular the naturally growing vegetation, sometimes supplemented with hay.

The human factors are connected with the use of time-established methods, allowing the product to keep over time its intrinsic characteristics, which are responsible for the wide distribution and appreciation of the product in consumer markets.

If the Ragusano cheese is not listed below, select a similar type of cheese from the list below to get a rough idea for the number of calories in Ragusano cheese.