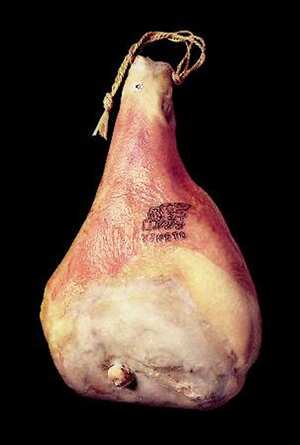 Prosciutto Veneto Berico-Euganeo is a DOP matured, dry cured ham, identified by a mark established by law and branded on the skin.

It has a natural, semi-pressed shape, without distal part (foot) and its weight on completion of maturation is between 8 and 11 kg, except in the case of hams for boning, in which case not less than 7 kg.

Its colour when sliced uniformly ranges from pink to red alternating with white in the fatty areas.

It is tied with string through a hole bored in the upper part of the leg and has a mild, delicate and fragrant flavour.

The history of the product dates back to antiquity and has been documented in its region of origin from the time written records began. Its historical and economic roots are to be found in the Celtic custom of using salt to preserve meat, later refined in the Roman period. Its origin has been documented historically from pre-industrial times with regard also to the area of origin of the raw material, being the product of an exceptional development of a typical form of farming common to the entire Po region that has found in the typical Veneto Berico-Euganeo ham production area a geographically inspired location with unique climatic and environmental conditions.

The practical requirements for obtaining the designation of origin are closely related to environmental conditions and natural and human factors; the raw material and the ham with the DOP are closely interrelated and have links with the productive, economic and social development of the geographical region that has determined their unique characteristic features. The raw material possesses characteristics which are attributable solely to the defined geographical macro-area. The development of pig farming in Central and Southern Italy, in an historical digression starting in Etruscan times and continuing up to the present, features the rearing of heavy pigs which are slaughtered at an advanced age. This development arose with indigenous breeds, evolved in line with environmental, social and economic conditions - in particular the cultivation of cereals and the processing of milk which are used for feed - and gradually found its natural and unambiguous objective in the production of the ham.

The defined geographical macro-area contains a number of smaller areas with unique environmental features and special human skills that have allowed them to develop as areas in which ham with a specific designation is produced; one of these areas, a small part of the Veneto region is that in which Veneto Berico-Euganeo ham is produced. Because of its location, the area enjoys unique ecological, climatic and environmental conditions attributable both to the presence of the foothills and the steady breezes reaching it from the nearby sea and to the presence of the Berici mountains and the Euganei hills.