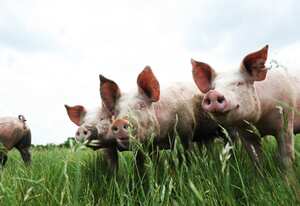 IGP Porc de Vendée is pork from the Large White breed, well-known due to its capacity to adapt to the territory and to its excellent breeding performances.

Production Method : The pigs are raised in the open air for a minimum period of nine weeks. Fodder includes corn, barley and other cereals, in addition to mineral salts and linseeds. The fatting starts from the 10th week and during this phase, since the 17th week, the animals must access to an area in the open air. To achieve animal with a similar weight for slaughtering, a selection of pigs is made to subdivide them into more or less homogeneous groups. The animals are butchered from 26 weeks of age. All the necessary precautions are implemented in order to avoid that the pigs could be affected by physical shocks and to reduce their stress to the minimum during the transportation to the abattoir.

Appearance and Flavour : IGP Porc de Vendée meat is pink colour with firm, white fat. The component of linseeds of the fodder makes the meat rich in Omega 3 fatty-acids.

Production Area : The production area of IGP Porc de Vendée covers the municipal areas of the department of Vendée, in the region of Pays-de-la-Loire, and some areas of the Poitou-Charentes region.

History : Important bibliographic and historic evidence of the farming of pigs in the production area of IGP Porc de Vendée go back to the 19th and 20th centuries. The farming process was strongly supported and relaunched. Today, the reputation of IGP Porc de Vendée is confirmed by the exclusive use of this meat in preparing some regional delicatessen.

Marketing : The product is sold as IGP Porc de Vendée. It is marked fresh, either whole without head or sliced. It is packed in containers with protected atmosphere to guarantee a longer conservation and keep unaltered the organoleptic features of the meat.

Distinctive Features : The IGP Porc de Vendée meat has a characteristic flavour which makes it much appreciated and used also to prepare famous and precious sausages.

Gastronomy : The IGP Porc de Vendée can be conserved for a few days in the refrigerator, wrapped into the purchasing paper and stored in the coldest compartment. It is ideal for a lot of dishes depending on the cut chosen. Anyway, a slow cooking is suggested, as it enables the meat to remain tender in the centre. Amongst the most appreciated cooking recipes, there are the barbecue and the oven roasting method. The most precious cut is the filet mignon, whose higher price is due to its rarity. Indeed, a pig delivers only 800 gr of this tender and succulent muscle. It can be cooked poêlé (sauté) or braised; it is tasty if marinated in olive oil, lemon and green pepper to enhance its flavour.