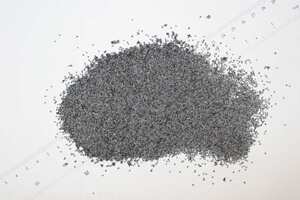 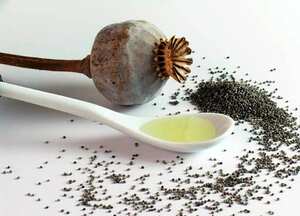 Poppy is widely consumed in many parts of Central and Eastern Europe. The mature seeds are used as a topping on various kinds of breads.

Although the drug opium is produced by "milking" latex from the unripe fruits ("seed pods") rather than from the seeds, all parts of the plant can contain or carry the opium alkaloids, especially morphine and codeine. This means that eating foods (e.g., muffins) that contain poppy seeds can result in a false positive for opiates in a drug test.

Waldviertler Graumohn is a g.U. poppy seed which is grey, kidney-shaped and relatively large in comparison with seed of other poppy varieties, at around 1-1.5 mm long and 0.7 - 1 mm wide. The surface appears criss-crossed with fine lines. It differs from blue poppy varieties through its delicate tegument and its oil content around 2 - 3% higher than average (between 43.4 and 48.4%). This gives the Waldviertler Graumohn a distinctive mild and nutty flavour. It contains an extremely high percentage of unsaturated fatty acids (ca. 85%). It belongs to the opium poppy or white poppy variety (Papaver somniferum Linné): it exists in both open and closed capsule forms. Open capsule forms are currently cultivated on a large scale, although in future the closed capsule form might also be grown on a similar scale for technical reasons.

The Waldviertel forms part of the Austrian Land of Niederösterreich: the border with the Czech Republic marks its northern boundary. Waldviertler Graumohn producing regions include the administrative districts of Zwettl, Gmünd, Waidhofen/Thaya, Horn, Krems/Land (north of the Danube) and Melk (north of the Danube).

The leaves of the Waldviertler Graumohn are softer than those of other poppy varieties, the edges of the leaves are slightly serrated and lobed and the stem is lightly covered with hairs. This helps Waldviertler Graumohn make use of the dew caused by the wide temperature fluctuations between day and night in the Waldviertel, contributing towards optimum development. The barren soil of the Waldviertel means that Graumohn grows slowly, greatly enhancing the quality and quantity of the poppy oil. Poppy growing is extremely important to the local agricultural economy, in which small farmers predominate. Its impact on the countryside is also increasingly important, especially for tourism. The red and white blooms attract a great many holiday-makers to the Waldviertel area each year. Poppies are also traditionally used in regional cookery.

Waldviertler Graumohn was probably introduced into the Waldviertel area by monasteries, since monks cultivated garden poppies from the early Middle Ages for their pain-killing and sleep-inducing properties. Evidence of this can be found in the earliest land register kept by the monastery of Zwettl, by Abbot Ebro in 1280. Poppy cultivation in the Waldviertel area is mentioned for the first time in tithe records (Zehentbüchern) kept in the second half of the 13th century. Agricultural statistics kept in the Austro-Hungarian Empire show that 1200 hectares of poppies were cultivated in 1912. After the Second World War the poppies were gradually squeezed out by plants that were easier to grow since they required less manual work. The old tradition of poppy cultivation in the Waldviertel was only revived from around 1980 onwards thanks to initiatives to promote agricultural alternatives.

Poppy growing requires a great deal of care; the ground must be prepared as for horticultural purposes. Since poppies have low susceptibility to frost the seeds are planted in spring (between the beginning of March and the end of April) so that the developing plants can make full use of the winter soil moisture. The poppy plant needs warm temperatures during the main growing season. Plant protection products have not yet been officially authorized for poppies. To counter weeds, a triple hoeing process is recommended. Dry harvesting weather conditions and rapid yet careful harvesting is crucial to the quality of the poppy and the seed case. Since, in contrast to other varieties, the Waldviertler Graumohn has a relatively high oil content and a delicate tegument, harvesting it with conventional combine harvesters would cause untold damage, crushing and spoiling it, thus badly affecting the quality of the harvest. For this reason the Verein zur Förderung von Sonderkulturen (Austrian association promoting specialised crops) has developed special poppy harvesting equipment.

How much does one cup of poppy seeds weigh?