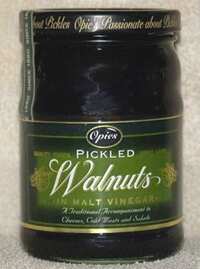 Wow-Wow Sauce (or Bow-wow sauce) is a sauce, apparently created by Dr William Kitchiner in the early 19th century. It contains port, wine vinegar, pickled walnuts or pickled cucumbers (gherkins), English mustard and mushroom ketchup in a base of beef stock, flour and butter.

The recipe below appears in Enquire Within Upon Everything (88th edition, 1894)

Chop some parsley-leaves very finely, quarter two or three pickled cucumbers or walnuts and divide them into small squares and set them by ready; - put into a sauce-pan a bit of butter the size of an egg; when it is melted, stir in to it a table-spoonful of fine flour, and about half a pint of the broth in which the beef was boiled; add a tablespoon of vinegar, the like quantity of mushroom catchup, or Port wine, or both and a tea-spoonful or made mustard; let it simmer till it is a thick as you wish, put in the parsley and pickles and pour over the beef - or rather send it up in a sauce-tureen.