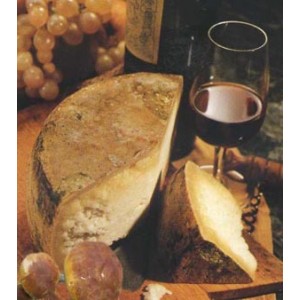 Pecorino dei Berici is a ewes' milk cheese from the municipalities of Mossano and Montegalda in the province of Vicenza in Italy. It is soft and rubbery, pale yellow, with no fissures and a thin rind. The cheese has a cylindrical form and is 6-7 cm in height and 14-18 cm in diameter, with a weight between 250g and 2 kg. It has a delicate, mild flavour which becomes stronger according to length of maturing. Pecorino from the lower regions of Vicenza tends to have a milder flavour compared to the variety made in the alpine regions.

In his book L'allevamento ovi-caprino nel Veneto (sheep and goat farming in Veneto), E. Pastore (1999) states: âsince the early 19th century in Veneto, different breeds or indigenous populations have been farmed, with well-defined morphological and genetic characteristics which even enabled the identification of different production areas. Once the lambs had been weaned, the ewes were milked for about 4 months, producing 150-200 litres of milk. The milk was used for private consumption or for making cheese which, because of high demand in Veneto, was sold to the small retailers in the area.

Whole sheepâs milk is heated in a caliÃ¨ra (vat) to a temperature of 30-35°C (the lower the temperature, the softer the cheese), after which cajo (rennet) is added. When the milk coagulates (after about 12 minutes), the curds are broken, first coarsely and then into desired size. The caliÃ¨ra is then put back on the heat and the liquid is heated at 33°C for 5-6 minutes so that the curds, stirred with a mÃ¨scolo or rissÃ²la, combine together. The caliÃ¨ra is then taken off the heat and allowed to stand for 10 minutes, in order for the curds to form a compact mass. The cooked cajÃ  (curds) are then extracted and poured into fassÃ re (moulds), where they are lightly pressed. The leftover whey can be used to make a particular kind of mixed sheepâs milk ricotta. The curds are dry-salted, directly on both faces of the cheese, and left covered in salt for 12 hours. They are removed from the fassÃ re after 48 hours. The cheese is then left to ripen and is turned after the first 15 days. The grÃ²sta (rind) forms after one week and from this moment on the cheese can be washed, even several times, in order to clean off any residue.

Pecorino dei Berici is ready to eat after 60 days. The strength of flavour varies according to length of maturing, which can be extended to around 3 months, at which point the cheese is considered mature. It can be kept for up to 12 months. The product can be found in dairies, âmalghe" (mountain huts), âagriturismi" (holiday farms) and in small retailers throughout Vicenza and neighbouring areas.