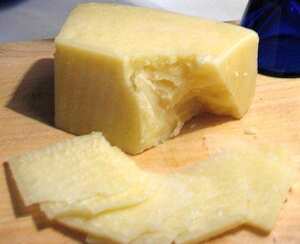 Pecorino is the name of a family of hard Italian cheeses made from sheep's milk. The word pecora, from which the name derives, means sheep. Most are aged and sharp.

Of the four main varieties of mature pecorino, all of which have Protected Designation of Origin (PDO) status under European Union law, Pecorino Romano is probably the best known outside Italy, especially in the United States which has been an important export market for the cheese since the 19th century. Most Pecorino Romano is produced on the island of Sardinia, though its production is also allowed in Lazio and in the Tuscan Province of Grosseto.

Pecorino Romano is most often used on pasta dishes, like the better-known Parmigiano Reggiano (parmesan). Its distinctive strong, very salty flavour means that it is preferred for some pasta dishes with highly-flavoured sauces, especially those of Roman origin, such as pasta all'amatriciana.

If the Pecorino cheese is not listed below, select a similar type of cheese from the list below to get a rough idea for the number of calories in Pecorino cheese.