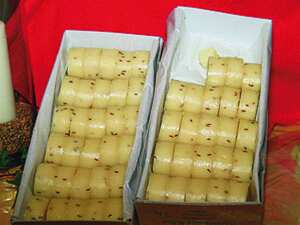 Ripening is based solely on the sour quark’s bacterial and yeast culture; no extra ripening cultures are added. This distinguishes ‘Nieheimer Käse’ from other sour milk cheeses . Geographical area

The production area for ‘Nieheimer Käse’ is the municipality of Nieheim. The milk to be used and the dry quark do not have to originate in the geographical area.

The cheese is produced from (homemade or bought) dry quark which meets the following quality parameters: dry matter content of at least 33 %, pH value of between 3,9 and 4,3, and fresh-mass fat content of less than 1 %. The dry quark comes 100 % from cows' milk. It is first finely ground in a mincer and put in cases. This quark mass is then placed in a ripening room. The length of the ripening process depends on the temperature and air humidity and can be taken from 3 to 5 days. The quark is fully ripe once the mass has turned a yellowish colour. The right moment for further processing is determined by means of visual and sensory examination undertaken by the individuals responsible. Cooking salt (2,5-3,5 %) and possibly caraway seed (0,01-0,03 %) are then added to the mass, which is mixed until distribution is even. The cheese mass is then shaped into rolls 4,0 to 4,5 cm in diameter, and subsequently cut with a cutting harp into pieces 2,0 to 2,5 cm wide. The small individual cylindrical cheeses are then placed individually on cheese shelves and must be allowed to cool. The cheese is subsequently packed in such a way as to be pervious to air; only in that way can it breathe and dry out slowly. The packaging may additionally consist of a protective layer of hops. In that case a reference is usually made to this variation in packaging and presentation. Variations in presentation are common.

Link to the geographical are

Milk curdles if left to stand in the sun or near a fire. Even before the birth of Christ, interaction had occurred between heat and lactic acid bacteria to produce Germany’s first sour milk cheeses. These are some of the few ‘original German’ cheese inventions. Many German regions have a long-standing tradition of producing a wide variety of sour milk cheeses. ‘Nieheimer Käse’ became a local speciality in the Nieheim area as far back as the early 19th century. In terms of production and ripening, it differs from other varieties of sour milk cheese.

‘Nieheimer Käse’ is a traditional regional speciality which is well known outside the region and highly regarded. The production of ‘Nieheimer Käse’ is based on a centuries-old, farmers’ method of cheese making in Nieheim and the surrounding area. Recipes and experience of cheese making as a local craft were handed down by families. Of key importance is the special production method: the dry quark is first ground and then ripens in vats before being shaped. Nieheim still has a lively cheese tradition, reflected in its regular cheese markets, which started in the 1920s and 1930s and continue to this day.