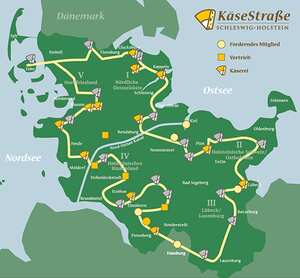 This wiki cheese category page contains detailed information and photographs of cheeses produced in the the European country of Germany.

You wouldn't immediately think of Germany as a major cheese producer, yet it produces more than 1.8 million tons of cheese annually making it the largest cheese producer in Europe, followed by France, Italy and the Netherlands. The largest percantage of German cheeses are made in Bavaria with other important cheese producing regions being Schleswig-Holstein, Mecklenburg-Western Pomerania and Saxony-Anhalt.

The Cheese Route (German: Käsestraße) is a holiday route in north Germany, which links cheese-producing businesses in the state of Schleswig-Holstein.

The following 19 pages are in this category, out of 19 total.