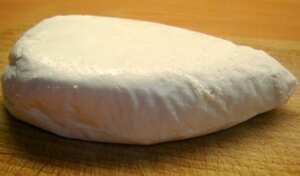 Quark (or qvark) is a type of fresh cheese of Central European origin. Dictionaries usually translate it as curd cheese. It is soft, white and un-aged, similar to Fromage frais. It is not the same thing as cream cheese or cottage cheese. It is distinctly different from ricotta because ricotta (Italian: recooked) is made from scalded whey. It also differs from the other cream cheeses in its usually much lower fat content (about the same as yogurt), and it is completely salt free.

Quark is a member of the acid set cheese group, meaning it is traditionally made without the aid of rennet. Because quark is consumed without ageing, in the United States the milk must first be pasteurised. Once the milk is ready, lactic acid bacteria are added in the form of mesophilic lactococcus starter culture. Acidification continues until the pH reaches 4.6, which causes precipitation of the casein proteins. In Germany, the curd is continuously stirred to prevent it from hardening, resulting in a thick, creamy texture. Quark is usually sold in plastic tubs with most or all of the whey. This type of quark has the texture of sour cream, but slightly dryer, and contains in its basic form about 0.2 % fat. Quark with higher fat content is made by adding cream, and is often sold flavoured with herbs, spices, or fruit.

To make the firmer eastern European version, a small amount of rennet may be added to make the curd firmer. Some or most of the whey is removed to standardise the quark to the desired thickness. Traditionally, this is done by hanging the cheese in loosely woven cotton gauze called cheesecloth and letting the whey drip off, which gives quark its distinctive shape of a wedge with rounded edges. In industrial production, however, cheese is separated from whey in a centrifuge and later formed into blocks. The Polish, Lithuanian and Austrian varieties contain less whey and are therefore drier and more solid than varieties common in other countries. It is often used as an ingredient for sandwiches, salads, and cheesecakes.

Quark from the Italian region of Marche is produced in the municipality of Urbino (Pesaro and Urbino) from spring to autumn using goats' milk or a mixture of goats' and ewes' milk. It has a soft, finely structured texture in a similar way to ricotta, with a sour and aromatic flavour. The cheese is salty and can be plain or have added chives or rocket.

If the Quark is not listed below, select a similar type of cheese from the list below to get a rough idea for the number of calories in Quark.