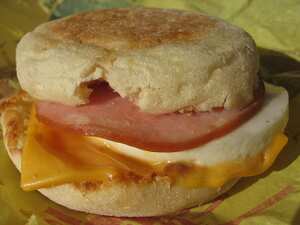 A Muffin (US: English muffin), also known as a hot muffin, or a breakfast muffin is a round, yeast-leavened form of bread almost always dusted with cornmeal. It may be eaten at breakfast in North America and Australia. It is also widely eaten in Britain, particularly with other savoury breakfast foods such as bacon, fried egg and sausage.

Muffins are commonly available for retail in the United States, the UK, Canada, New Zealand, and Australia. They are also found on the breakfast menus of American fast food restaurants worldwide. They are most often toasted then topped with butter and/or jam. They are also used in breakfast sandwiches with bacon, ham, or sausage, egg (fried, scrambled, poached or steam-poached) and / or cheese.

They are the base ingredient in the traditional New York brunch dish, Eggs Benedict.