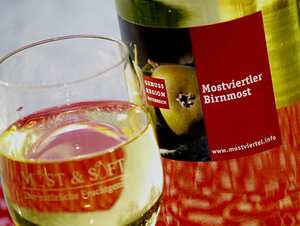 Mostviertler Birnmost is produced by cask fermentation of the juice obtained from pressing perry pears. It is fully fermented, clear, without any turbidity and â depending on the variety of perry pear used â reddish-yellow, gold-yellow, light-yellow or greenish-yellow in colour. Under the Austrian Wine Law, as a quality fruit wine its alcohol content must be at least 5 % vol., its titratable acidity (expressed as tartaric acid) at least 5 g/l, and its sulphur content no more than 40 mg/l free SO 2 and 150 mg/l total sulphur. Residual sugar must not be more than 5 g/l unless the perry has been bottled cold-sterile in a closed process, i.e. not pasteurised, in which case even higher residual sugar values are possible. The volatile acid (acetic acid) content must not exceed 0,8 g/l. Compliance with these criteria must be checked by laboratory analysis.

In addition, in the test for award of the Lower Austrian Mostviertler (perry/cider quality seal) the perry must gain at least 17 out of a possible 20 points in order to qualify to be designated and marketable as âMostviertler Birnmostâ (ordinary perries and mixed apple and pear musts, on the other hand, require only 14 points). In this blind, sensory test carried out by trained tasters selected and appointed by the Lower Austria Chamber of Agriculture, appearance (1-3 points), aroma (1-5 points), taste (1-7 points) and harmony (1-5 points) of the product are judged. If it satisfies these criteria, a perry or cider is entitled to bear the Lower Austrian âMostgÃ¼tesiegelâ (perry/cider quality seal).

Characteristic of Mostviertler Birnmost is the fruity, pure taste of perry pears. The addition of concentrated fruit juice or cider apples is not allowed. The basis for production comprises perry pears, i.e. pear varieties whose astringent phenol content makes them unsuitable to eat, unlike dessert pears.

The name Mostviertel (lit. fruit-must quarter) is not an official or cartographic designation, but a traditional geographical term for the south-eastern part of the province of Lower Austria, namely, the area above the Wienerwald in which economically and traditionally great importance is attached to perry. The area, which is excellently suited to perry pear trees, is generally regarded as extending from the Danube to the Alps and from the Enns up to and including the Wienerwald. This roughly corresponds to the districts Amstetten, Scheibbs and Lilienfeld, the area covered by Waidhofen an der Ybbs, and the parts of the districts Melk and St Polten-Land located to the south of the Danube. All raw materials originate, and all stages of production are performed, within the above geographical area; only bottling may be done outside the area.

The labels show the producersâ names and addresses and the batch numbers, so a bottle of perry can be traced right back to the cask. The batches have to be entered in the cellar books, which are regularly checked by cellar inspectors. The batch numbers may be individually designed or systematised by each producer. In the event of an inspection or a complaint, however, the producer must be able to show clearly and unequivocally which quantity was bottled from which batch. This is done by means of entries in the cellar book. In the case of bottling outside the production region, the same procedure has to be followed. The bottlers are identified on the labels.

Approximately 2 kg of fruit are required for one litre of perry. As producers generally only use the fruit from their own trees, it is easy to relate the volume of perry to the yield of a farm's trees by means of a plausibility test. If perry pears are bought in, traceability must be ensured by means of delivery notes.

Only pears of the 59 varieties typically used for Mostviertel may be used to produce Mostviertler Birnmost. They are produced in the designated region in an environmentally friendly and traditionally extensive manner. Plantation growing is permitted. The perry pears are harvested fresh, i.e. gathered as fallen fruit or plucked straight from the tree by hand or by means of fruit-gathering machines, washed and then crushed. The resulting mash is pressed to obtain juice. The juice has any slime removed from it, if necessary, and is put into wooden, plastic or stainless steel casks for targeted, pure fermentation by adding pure-bred yeast. The fermentation period comprises a maximum of 3-6 weeks in order to prevent the occurrence of defects detrimental to taste. After fermentation the perry is drawn off as quickly as possible from the sediment (dead yeast and small fruit particles). The Mostviertler Birnmost is then treated by means of sulphurisation, clarification with gelatins or bentonites, the addition of malic, lactic or citric acid, and sweetening and filtration, so that the resulting product is stable and complies with the Austrian Wine Law.

In the 'Mostviertel' region, both climatic and soil conditions are ideal for growing perry pears. The climate is damp enough and not too warm, and the soils have the ideal depth and fertility. The region ranks as the largest, self-contained area of fruit trees in Europe and has several hundred thousand fruit trees in it.

The area corresponds to the Lower Austrian part of the molasse and flysch zone (red and black shales). The soils are predominantly brown earth and brown loam. They are accordingly characterised by their depth, and the climate by high precipitation (approximately 800-1 500 mm/year) and high humidity. As a result of these special conditions, the perry pears can build up sufficient acid and tannin, two substances crucial to the perryâs taste and stability.

The first reference to perry in the region was made by the Minnesinger Neidhart von Reuenthal as long ago as around 1240. As numerous other documents show, perry production in the Mostvierteler continued to gain importance in later centuries too. Most of the perry pear trees now have very high yields and are about 100-150 years old. The use of old pear trees will preserve them and their descendants for the future as an expression of a very environment-friendly, extensive and traditionally- rooted form of agriculture on small family farms. Only through this economic use can the pear tree continue to be preserved in future as the landscape feature typifying the âsymbol of the Mostvierteler, benefiting it indirectly as a tourist attraction (e.g. intensive advertising of the late-April blossom period â âThe âViertelâ in bloomâ).

The strong link between the perry and the region is illustrated by numerous activities and attractions which centre on perry production (e.g. perry baptisms, perry taverns, perry route) and references to this can be found on numerous websites. In 2005 the Mostviertel was included as one of the Genussregionen Ãsterreichs (Austrian regions of culinary delights) thanks to perry, the defining product typical of the region, and the fact that it is firmly embedded in the regional gastronomy (see http://www.genuss-region.at). Thanks to the pleasure 'Mostviertel' producers take in innovating and their awareness of quality, perry has also established itself as the perfect accompaniment to fine dining and is even offered in such renowned Viennese temples of enjoyment as Meinl am Graben.