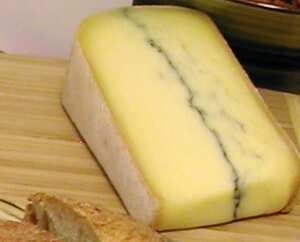 Morbier is an AOP semi-soft cows' milk cheese named after the small village of Morbier in Franche-Comté. It is ivory coloured, soft and slightly elastic, and is immediately recognisable by the black layer of tasteless ash separating it horizontally in the middle. It has a rind that is yellowish, moist, and leathery.

Traditionally, the cheese consists of a layer of morning milk and a layer of evening milk. When making Gruyère de Comté, cheesemakers would end the day with leftover curd that was not enough for an entire cheese. Thus, they would press the remaining evening curd into a mould, and spread ash over it to protect it overnight. The following morning, the cheese would be topped up with morning milk. Nowadays, it is usually made from a single milking with the ash added for tradition.

The aroma of Morbier is found somewhat objectionable by some, although the flavour is rich and creamy, with a slightly bitter aftertaste. The Jura and Doubs versions both benefit from an AOC, although other Morbier is available.

If the Morbier cheese is not listed below, select a similar type of cheese from the list below to get a rough idea for the number of calories in Morbier cheese.