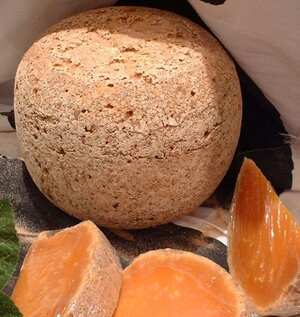 Mimolette is a hard, cows’ milk cheese traditionally produced around the city of Lille (Nord-Pas de Calais) where it is also known as Boule de Lille, and also in some areas of Belgium and the Netherlands, such as Flanders where it is known as Vieux Hollande or Commissiekaas.

It was reputedly made by the request of Louis XIV, who wanted a French cheese to resemble Edam. In order to differentiate it from Edam, however, he had it coloured orange.

The cheese normally weighs about 2 kg and has a grey rind with an orange interior. When young its rind is supple, but with age it becomes harder. The orange colour comes from annatto. Due to its appearance, it is often mistaken at first glance for a cantaloupe melon. The greyish rind of mature Mimolette is the result of cheese mites intentionally introduced to add flavour by their action on the surface of the cheese.

Mimolette can be consumed at different stages of maturity (2 months to 2 years). When younger, its flavour resembles that of Parmesan. Most cheese-lovers appreciate it most when "extra-old" (extra-vieille). At that point, it can become rather hard to chew, and the flesh takes a hazelnut-like flavour and has a few small holes.